Harold Cromer left us just as he would have like it. Trying to figure out just exactly how old he was. As best we can tell, he was, and forever will be 47 – at least that was the number that he stuck to. As with many aspects of tap dance’s oral history the birth year of Dr. Harold Cromer, may just remain a mystery. Nevertheless, it is not necessarily when the life began that is most important, but rather the fullness thereof. And in that regard Dr. Cromer’s life was full beyond measure.

Below is a memorial written by Cromer’s biographer Annie Rudnick (reprinted with permission):

Known for his captains cap, wide smile, and impeccable memory, Harold Cromer was the sage of the stage. A self-taught triple-threat, Cromer performed in Vaudeville, Broadway, and beyond, showing his audiences the grace and humor of a seasoned skillful entertainer. Cromer was an encyclopedia of songs and dance and often performed routines on the drop of the dime from any show that came up in conversation. Throughout his life, Harold Cromer was a teacher and mentor to many.

A lifelong New Yorker, Cromer was born in Hell’s Kitchen. He and his twin sister, Hattie, were the middle of nine children of parents Hattie DeWalt and, longshoreman, William J. Cromer. Cromer and his siblings spent most of their childhood attending activities at the historic Hudson Guild. There he got his first taste of the stage. He performed in a dress and long pig-tail braids (he and his sister dressed identically until they were about 6 years old).

Harold Cromer began his entertainment career singing and dancing on street corners in roller skates. He used the sound of the wheels against the pavement to create the clickety clack of tap dance. He danced to help his family during the days of the Great Depression, sometimes earning a bag of groceries at local competitions. In the mid 1930’s, while tap dancing on the streets, a Broadway producer approached Cromer and asked, “Do you speak French?” “Bien sur, monseiur, et vous?” Cromer responded, and he was hired on the spot to perform on Broadway alongside Ethel Merman and Bert Lahr in DuBarry was a Lady. Cromer continued on tour in this hit musical as the only colored performer in the cast.

Cromer performed on the Vaudeville stage originally as the understudy for many of the great dance and comedy duos including Buck and Bubbles, Moke and Poke, Chuck and Chuckles and others. He knew all the routines and could jump into any character as needed. In 1948, Cromer joined James “Stump” Cross in the duo “Stump and Stumpy.” Together, “Stump and Stumpy” became favorites of the dance and comedy duos. In 1955, Stump and Stumpy headlined at the opening of heavyweight champion Joe Louis’s Moulin Rouge, the first integrated nightclub on the the Las Vegas strip.

In 2008, Bloomfield College awarded Harold Cromer with an honorary doctorate in performing arts. One of many awards he received from universities, dance organizations, and the City of New York.

Cromer traveled widely as master teacher and choreography, known especially for his work Opus One. Originally reconstructed by Cromer with tap dancer Andrew Nemr, for the New York City Tap Festival, Tap City (2004). Cromer would go on to teach this work at tap conventions, festivals, and workshops throughout the world, even in China with a number of assistants. Cromer described Opus One as more than a dance, but a way of life. Opus One continues to be taught, danced, and lived.

Cromer performed for more eight decades throughout the United States, Europe, Japan and China, bringing joy and a knowledge of history to every person he met whether on the street or stage.

UPDATED [SPET 28, 2013]: Information regarding the New York Memorial Celebration may be found here.

“Black & Blue” a musical revue celebrating the black culture of dance and music in Paris between WW I and WW II.

The revue was presented at the Chatelet Theatre, Paris 1985. The Broadway production opened on January 26, 1989 at the ‘Minskoff Theatre’ ran for 829 performances and 32 revues, and closed on January 20, 1991. Directed by Hector Orezzoli & Claudio Segovia, Choreographed by Dr. Henry LeTang, Dr. Charles ‘Cholly’ Atkins, Frankie Manning, and Fayard Nicholas. In this clip from “Black & Blue” Dr. Jimmy Slyde is featured…. Enjoy…. 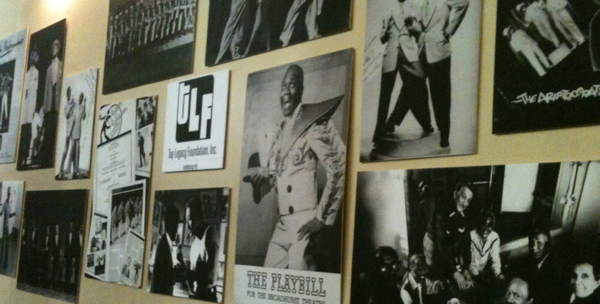 Don’t miss the Tap Legacy Exhibit week long installation at Church for All Nations (NYC). We will be celebrating Black History Month and Gregory Hines’s birthday all week. Special viewing hours include the presence of Tap Legacy staff with intimate knowledge of the exhibit content.

SATURDAY’s viewing hours will coincide with a special jazz performance at 8pm, presented by Jazz Underground.

Church for All Nations is located at 417 West 57th Street (between 9th and 10th Avenues).

The Tap Legacy Calendar has made a giant leap forward in supporting the tap dance community. In addition to tap dancer’s birthdays the calendar will now list Jam Sessions, Intensives, and Festivals. Anyone can also submit events for review and posting to the Tap Legacy Calendar. The calendar submission form will accept Jam Session, Intensives, and Festivals, and all submissions will be subject to review and the posted Calendar Guidelines.

The Tap Legacy Exhibits will be showing in partnership with the Moving Beauty Series on November 11th and 12th. See the details below and don’t miss the chance to see the exhibits.

With the announcement of Johnny Brandon’s honoring at this year’s Tap Extravaganza, we thought it an appropriate time to launch the tribute site for his teacher and mentor, Buddy Bradley. Complete with biographical information, and a body of work description, this is the only repository on the career of Buddy Bradley.